I am currently a senior undergraduate of Automation Department at Shanghai Jiaotong University and an undergraduate researcher at the Intelligent Robotics and Machine Vision Lab . I also worked with MSC Lab at UC Berkeley in 2021 advised by Prof. Masayoshi Tomizuka. 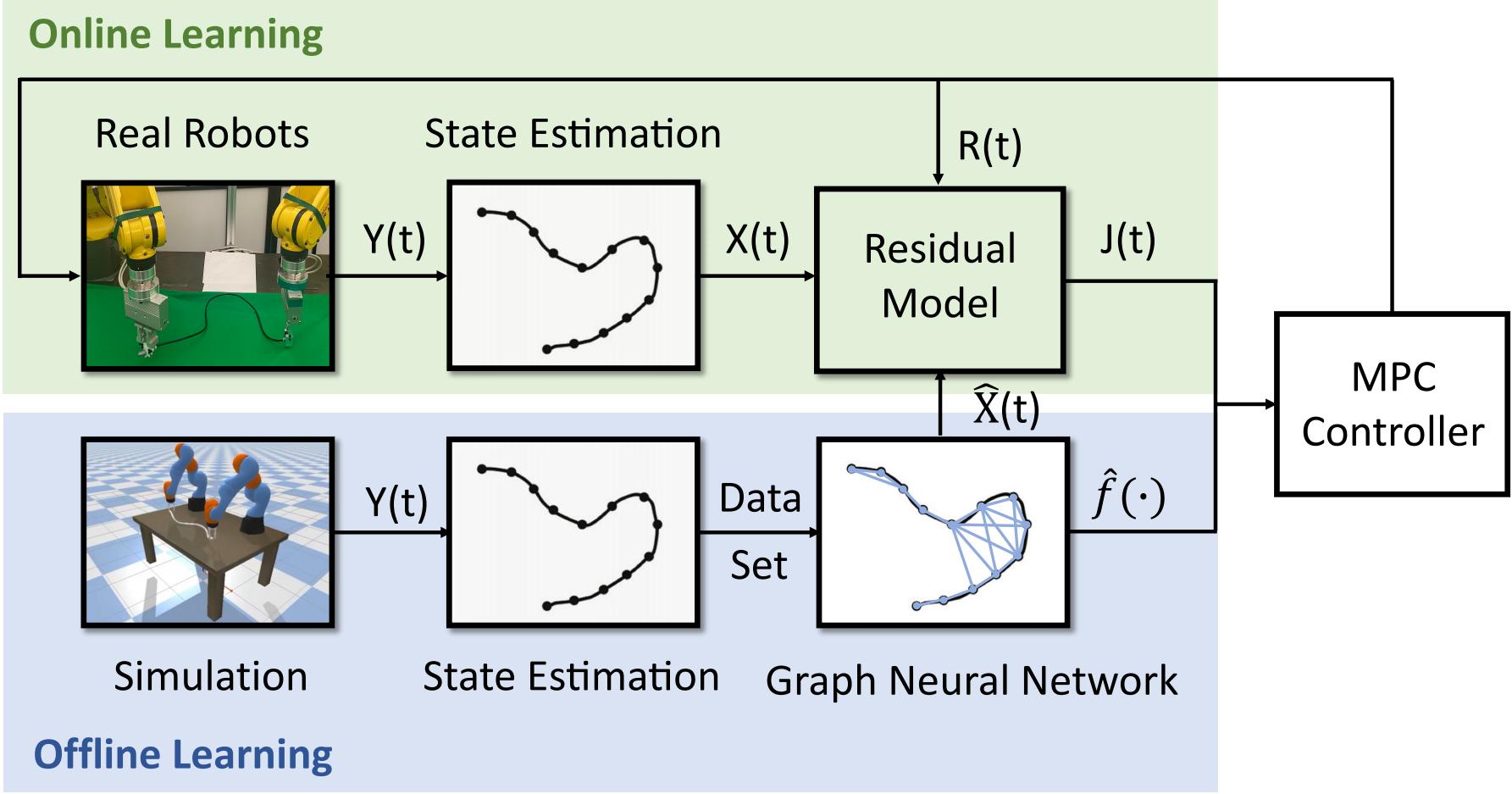 Manipulating deformable objects by robots has a wide range of applications, e.g., manufacturing and medical surgery. To complete such tasks, an accurate dynamics model for predicting the deformation is critical for robust control. In this work, we deal with this challenge by proposing a hybrid offline-online method to learn the dynamics of deformable objects in a data-efficient manner. In the offline phase, we adopt Graph Neural Network (GNN) to learn the deformation dynamics purely from the simulation data. Then an online local residual model is learned to resolve the sim-to-real gap in order to achieve better accuracy and generalizability. The learned model is then utilized as the dynamics constraint of a Model Predictive Controller (MPC) to calculate the optimal robot movements. The online learning and MPC run in a closed-loop manner to robustly accomplish the task. Comparative results with existing methods are provided to show the effectiveness and robustness quantitatively.

Most of the research on deformable objects manipulation (DOM) is under the assumption of the fixed contact (FC). Although there are some attempts to break this assumption, research on DOM with the fully non-fixed contact (FNFC), which refers that the object is not fixedly connected to both the end-effector and the surrounding environment, is still in its infancy. In this letter, we propose an optimization-based strategy of contact selection in the condition of FNFC according to the assessment of the surrounding environment and the task set. Two indexes are designed to quantify contact stability and operation efficiency, respectively, which can be used to form an optimization problem for obtaining the optimal manipulation point (MP). Finally, the effectiveness of the proposed algorithm of contact selection is validated by experimental results. 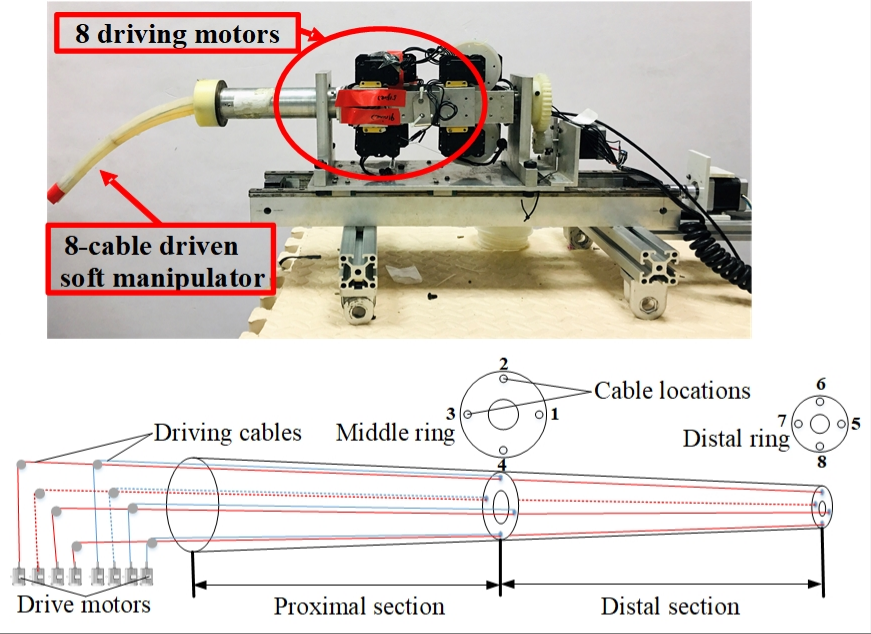 Soft continuum robot outperforms its rigid counterpart when executing in complicated environments thanks to its high dexterity of the redundant configuration. Shape control is regarded as a prerequisite to applications in unstructured environments. In this paper, we develop an adaptive image-based visual servoing(VS) algorithm using an uncalibrated camera to realize visual shape control of the cable-driven soft manipulator. A Bezier curve is selected to be the feature providing shape information of the soft robot. An adaptive law is proposed to simultaneously resolve the uncalibrated problem and to analytically model the motion of curve control points. The control algorithm is then designed with third-order Bezier curve being the image feature, and theoretically proves its stability. The algorithm has been experimentally validated in the cable-driven soft continuum robot. The experiment results demonstrate rapid converging performance to C-type and S-type reference shapes. 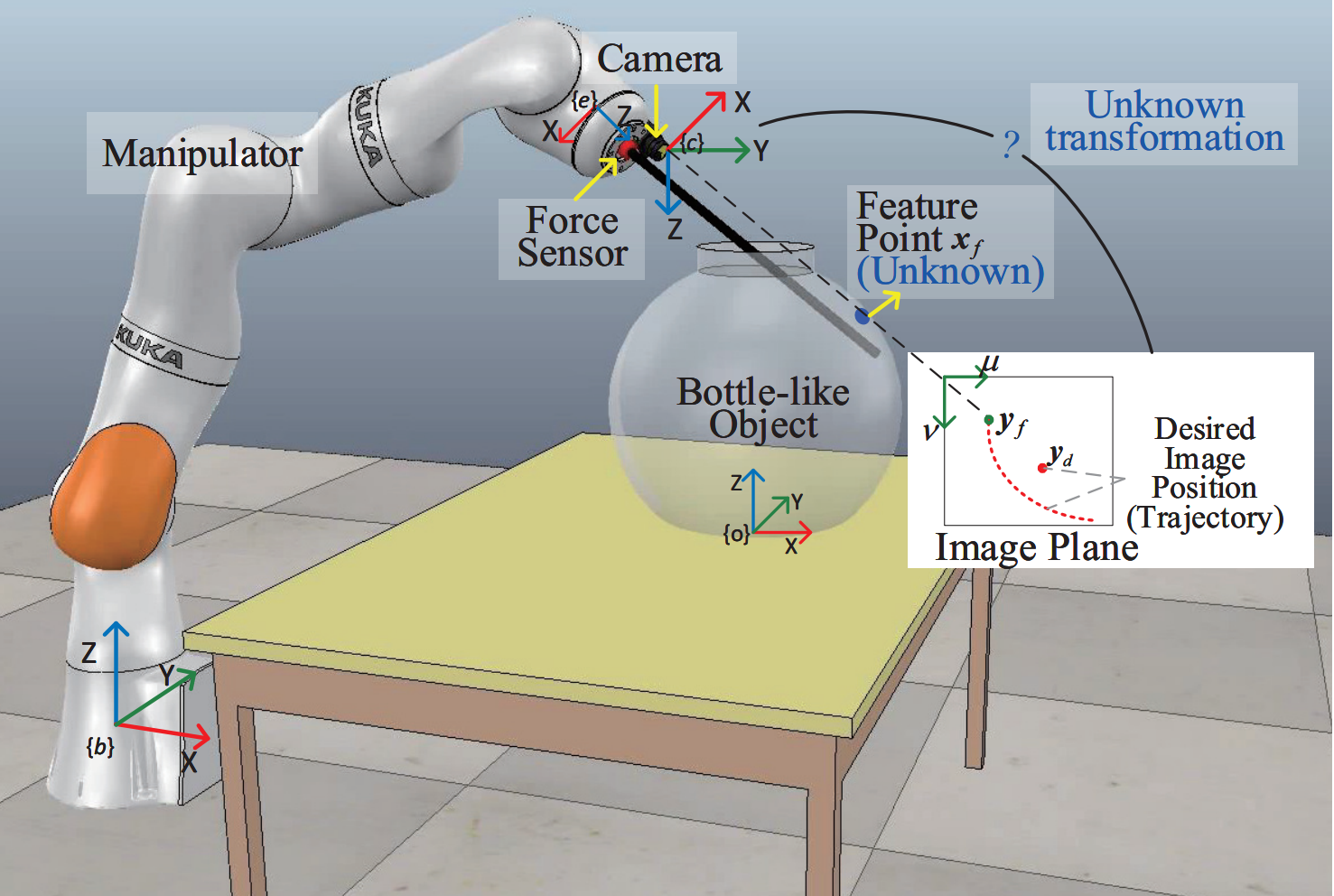 This study proposes new hybrid vision/force control schemes for interaction with the inner surface of the bottle-like mold under the bottleneck (BN) constraint. First, to guarantee the BN constraint, the transformed error with the prescribed performance function is introduced, and the corresponding kinematic formulation is derived. Then, an adaptive kinematic-based static visual servoing controller and a dynamics-based visual tracking controller are proposed with the uncalibrated camera, the unknown 3-D position of the feature point, and the unknown surface. Both controllers can complete the corresponding tasks in the image space while ensuring that the interaction force reaches the desired value without violating the BN constraint. Through the combination of the designed two controllers, we can accomplish different tasks. For the task of cleaning a bottle, first, the servo controller is employed to guide the tooltip to the specified position on the interactive surface. Then, the tracking controller is used to control the trajectory and interactive force during the motion. Finally, the stability of proposed algorithms is rigorously proved by the Lyapunov theory and the effectiveness is tested by experiments.